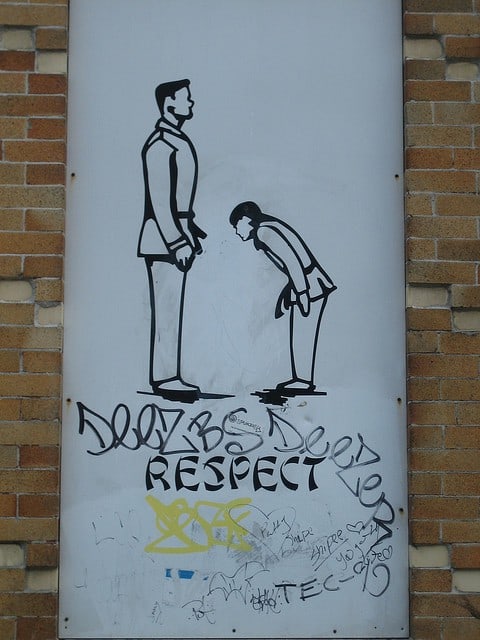 The word respect lost his meaning…

In the last three months, I got two specific occasions where someone lacked of respect towards me. Those two situations where from people I would never expect that, at all. They were also a consequence, in my own opinion, of a selfish attitude, I see more, and more in today’s world: my opinion is the only that make sense. Let me tell you about those two examples.

Three months ago, we realized that Hydro-Québec (our electric company) was doing, what I call, a deforestation of the small number of trees we have in our street. They were cutting mostly all trees, not just the branch: most of them seem to have a couple of dozens years behind their neck. The only reason my neighbors, and I found is because they are about one to two meters near electric cables. I’m no expert, but I thought that just trim those would have been enough: one or two meters aren’t too close I guess. A bit frustrated about this, I wanted to get more information, and do an official complaint. After all, it’s not a good move against mother Nature, it gives now a full view of our condo to people using the cycle track, and those trees were helping cutting the sound from the highway near our house. I’ve been told by Éco-Quartier to call 311 for our neibourhood, Verdun. It’s what I did. When I told the woman about what Hydro-Québec were doing, and I told her I wanted to make an official complaint, she laught at me, and ask me why I wanted to do this… Like if I was a total idiot! Wheter you think I’m right or wrong, whether Hydro-Québec did a good job or not, this is my right to make this complaint, and should respect my right, but also me, as a person, as a citizen you have to serve: it’s even your job!

Just this morning, I came back from the store, and got stop by the SPVM. The cop came to my car, and announce me that I didn’t make my stop. It was surprise as I did my stop: it wasn’t the longest one, but my car was immobilized. Actually, whether I merit this statement of offence or not is not my point. After he told me why they arrested me, I answer that I did my stop, as always. At this exact moment, this young man lost my respect as guess what, he laughed at me. I think the role of a policeman was to serve the citizen, and for me, it means being respectful to them. Again, like if I was an young idiot trying to save some money: I have no problem to pay for the error I do, but it wasn’t the case. Worst case, even if I was trying to trick him, he had no right to be disrespectful.

I don’t know if it’s me, but I have the feeling that the respect is less, and less a real concept in our society. Those are only two small examples of what I saw recently, and it amazed me…