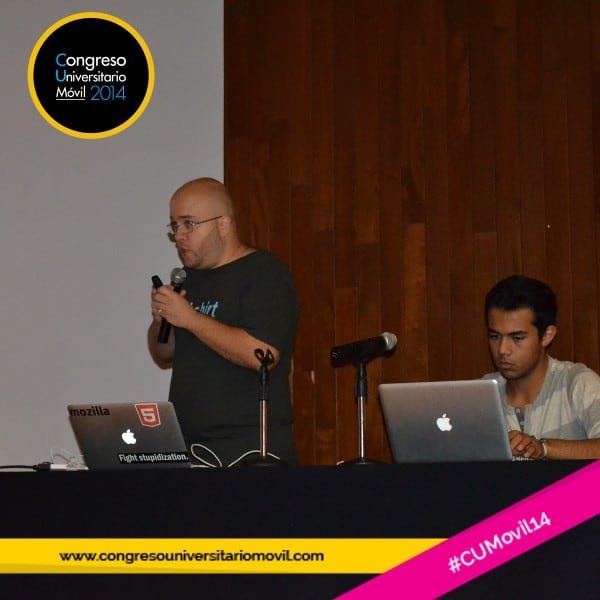 HTML, not just for desktops at Congreso Universitario Móvil

At the beginning of the month, I was in Mexico to represent Mozilla at Congreso Universitario Móvil, an annual conference at the Universidad Nacional Autónoma de México. Unfortunately, I did not have the time to visit a lot Mexico City, but I had an amazing full day at the event. I started the fourth day of the conference with a keynote on Firefox OS.

You can also watch the recording of my session. The sound is not that good: the room was echoing a lot, but I promised to the attendees that no matter what, I’ll publish it online.

The attendees had so much interest in the Open Web that instead of taking a couple of minutes for the questions, I did a full one hours Q&A right after the keynote. They were supposed to have a one-hour break before the next session, but they used that time to learn more about Firefox OS, which is great. I think we would have been good to continue on the questions, but I had to stop them as it was time to start the three hours hackathons. I started the hackathon with explanations about the next hours we spent together, but also on how to build, and debug your application.

I also recorded that presentation, which took more than fifteen minutes as it include explanation about the hackathon itself. Again, we were in the same room, so the sound is not optinal.

Attendees worked hard to port their actual web application using HTML, CSS, and JavaScript to make them work on our platform. After the hacking part of the day, I did three interviews with local medias, and one is already online on Excélsior (in Spanish – English version translated by Google). The one with Reforma, and Financiero Bloomberg TV will follow soon. Overall, I had an amazing time again in Mexico, and I was amazed by the interest about HTML, the Open Web, and Firefox OS. Keep the great apps coming Mexico!