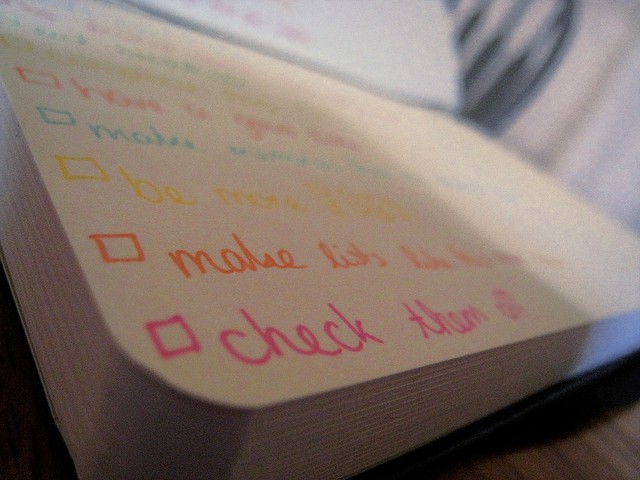 Last year, I did a list of things I wanted to achieve in 2012. It was like a big list of resolutions, that I had more, and less in my head all year long. Let’s do a quick recap.

I wanted to blog more

I definitely blog more in 2012, than in 2011. I made 120 blog post compare to the 69 I did last year, nearly twice the posts I did the year before. Those one hundred twenty blog posts are only those I made on this blog, I didn’t count those I made on MSDN, MSDN FR, Woot Studio, GoDevMental, and of course, Make Web Not War.

I wanted to eat healthier

I had better eat habits in 2012, but there is definitely a place for improvements here. I went less often to restaurants, and I was choosing a better meal most of the time, but it was far from being perfect. If I had to choose one item on my list I’m the less proud of, it would be this one!

I wanted to read more

I read more. Not as much as I wanted, but I read at least 3-4 times more than last year. This resolution was centric around books, but gradually as the year progressed, I thought it was more about learning, than reading book itself.

I wanted to do more exercise

It took me a long time to get into this one, but I finally made it. Like the one on the food, this one could be improve a lot more, but I lost more than 20 pounds, so I’m really happy with it. Now I need to keep the pace, and continue to lose weight!

I wanted to write a book

My plan was more to write a book for the pleasure of writing one, something that I would put as an ebook format for free, but I’ve been approached by an editor to write on a technical topic. So I started the writing process at the end of last year, and I will finish it probably this week (it’s not a big book). More details on this when the book will be available.

I wanted to be better in my role

With modesty, I can say I’m better in my role as a Technical Evangelist. I still have a lot to learn, but I think everybody, even the more senior ones, have many other things to learn about the work they do. I’m happy with what I achieved as a Microsoft employee in 2012, and I know I have an even better 2013 in front of me.

By reviewing my year, and the list I made, I thought many things were wrong with it…

I took 6… Even if I think I can focus on 6 things for a year, maybe it’s too much. I should focus on less topics for the year, but get them to the next level. Aim for quality instead of quantity. Get some aspect to the next level, instead of having an average year that I was happy with, but not proof of!

Those were not all quantifiable

Most of them were not quantifiable. They were specific on some topics, but I was not able to have a clear goal. What’s that mean to be better in my role? Does more blog post? Reach more people? Get more apps? I wasn’t clear, now I’m saying that I was better in my role than in 2011 by basing myself on some assumptions. Even the one where I put some metrics, like eating healthier were not clear: eating 2 times maximum per week in the restaurant, does that mean I will eat better food? I’m not sure we need quantifiable resolutions, but if you want to have more than 2-3, be sure that these will be crystal clear.

Many things can happen

I had the feeling that these were immutable. Like if I remove or change one, it was like I didn’t succeed. Many things can happen in a year, so maybe a resolution won’t be topical anymore after a couple of months? Maybe it won’t suit my needs anymore? I think I need more like guides, than rigid directions.

With all this in mind, I still think 2012 was an amazing year for me: I was still doing a job I like, I bought a condo, I’m still with the one I love, I have good friends… On the other end, I was exhausted at the end, I had the feeling I was reacting instead of planning, and I didn’t have much time for me, only for me. Since this post is already too long, I’ll do a separate one to share my plans for 2013! Since you had the time to meditate a bit on the last year, are you happy with what you achieve? Are you happy on where you are now? Was 2012 a good or a bad year for you? Share your thoughts!